Tomorrow night the 2017 AFL footy season kicks off between Richmond and Carlton, but I’m more interested in Saturday night’s game between Hawthorn and Essendon.  The Hawks are missing their big names from the last few years, while the Bombers have their big names back from last year’s drug suspension.

I’m tipping Richmond to win tomorrow night, and Essendon on Saturday.  For 2017 I’ve decided to publish my footy tips on this site, but I don’t want football to take over the blog feed, so I will keep them seperate from my blog posts.  My wordPress theme allows you to publish blog style posts as a “Project”, seperate to the main blog.

You’ll find my 2017 footy tips at simonyeo.id.au/project_tag/afl-2017-footytips, plus I’ve added a link in the main menu.

Below is a screenshot of my Round One AFL footy tips from, available at… simonyeo.id.au/project/2017-afl-footytips-round-1
NOTE: My Fremantle tip was changed to Geelong on Sunday morning before the match to be the same as my official tips. 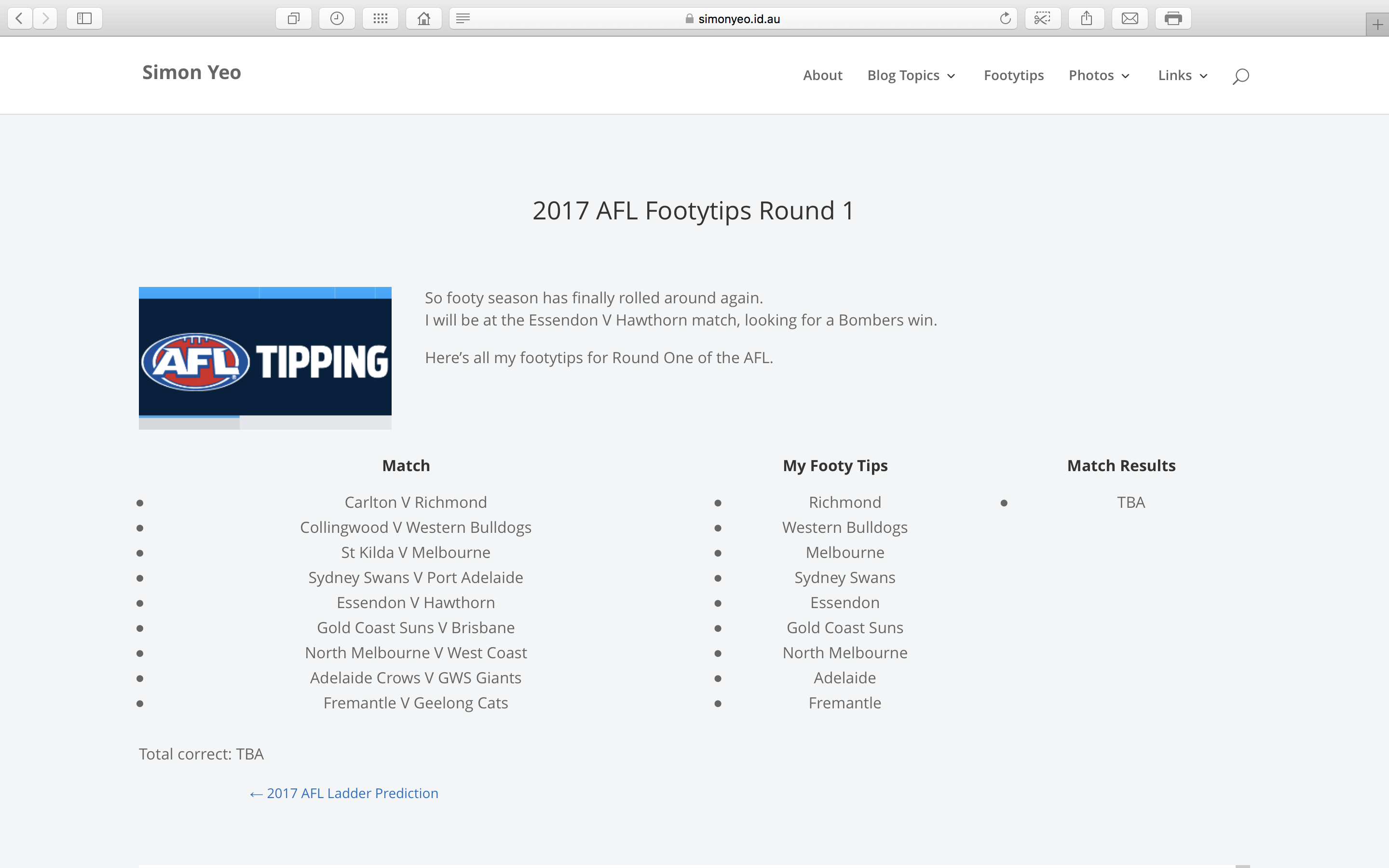 I’ve also had a go at predicting how the AFL Ladder will look at the end of the Home and Away season.
Read this post simonyeo.id.au/project/2017-afl-ladder-prediction or see the screenshot.

I’ll re-visit these predictions at the end of the season to see how wrong I was. 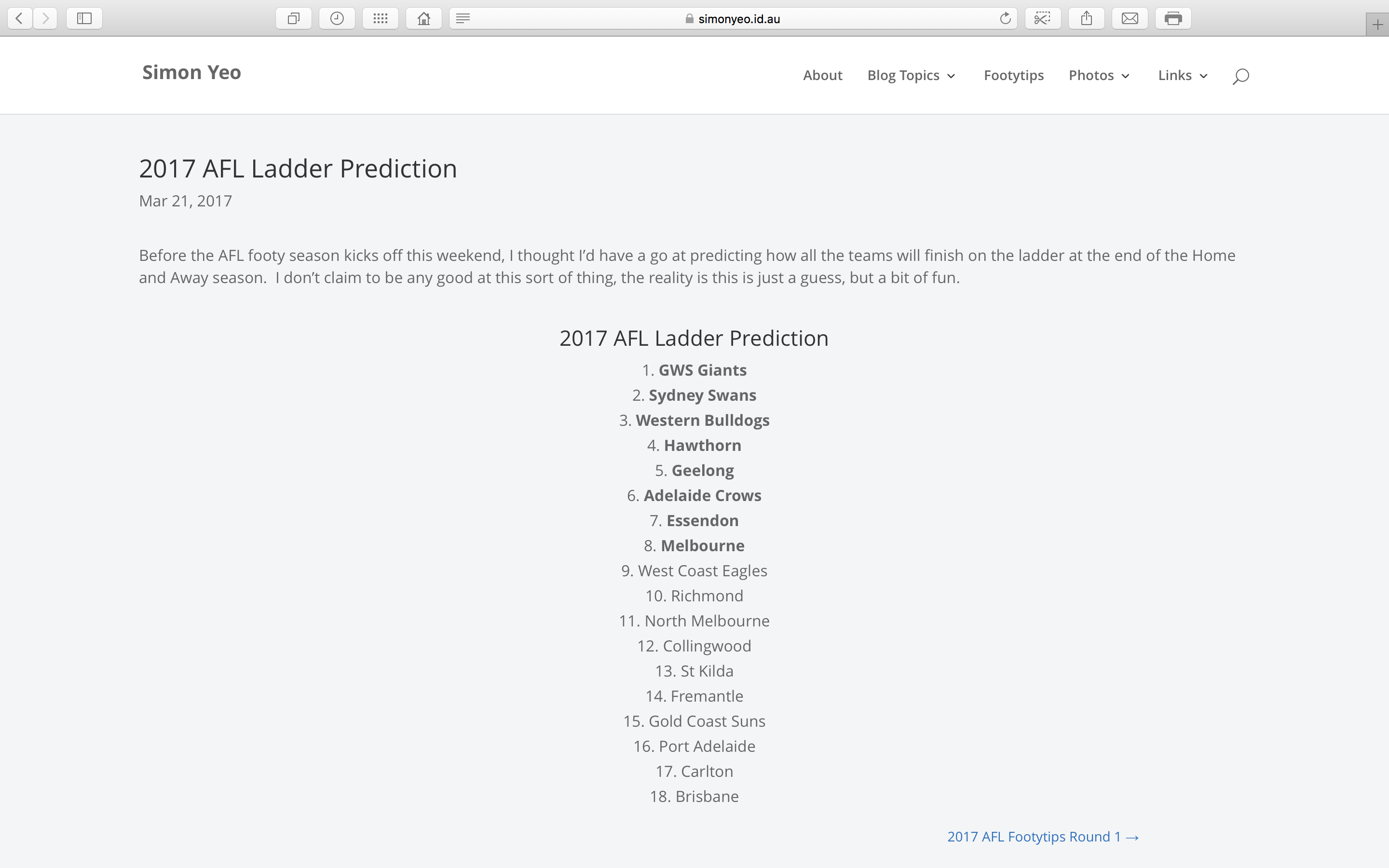 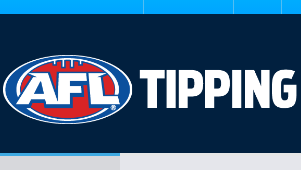 With the AFL Home-and-Away season completed, I thought I’d report on the success (or lack of) in my footy tipping for 2016.

It’s safe to say, I didn’t win any prizes!

The Fremantle Dockers haven’t been able to win any of their ten AFL games of footy this season, yet they are favorite to win against the Essendon Bombers tonight.

Why is nobody tipping Essendon to defeat Fremantle, when the Dockers haven’t won a game yet?

Sure, Essendon have lost half their team to drug suspensions (hardly the players fault when the drugs were administered by the club, but that’s a whole other issue), but in every one of their games this season they have shown determination and played hard for two or three quarters. That was enough to get the win against Melbourne in round two, so I don’t see why an Essendon win should be ruled out against a team who hasn’t won any games themselves so far. Surely the Western Australia home ground ins’t that much of an advantage?

We will find out the answer tonight. Go Bombers!

UPDATE; 10:10PM
Well it looks like everyone tipping Fremantle to win knew what they were talking about.
Essendon suffered an embarresing loss, scoring only 47 points to Freo’s 126.
Full match results here – www.afl.com.au/match-centre/2016/11/fre-v-ess