The past nine days have been horribly painful, but I knew my hospital stay was coming.  I went under the knife last Tuesday, having major abdominal surgery to address a bowel issue and repair a hernia, both related to an even bigger operation 14 years ago.

The Pain and Drugs

Lets be honest, having your chest and stomach opened with a knife is always going to hurt, I certainly remember the pain from 2002, but I still wasn’t prepared.  I took a heap of magazines to the hospital with me to catch up on some reading and thought I’d get the family to bring in my iPad for movie watching on day two or three.  Most of my time, however, was just spent laying in the uncomfortable hospital bed, or sitting in an equally uncomfortable hospital chair.  Despite all the pain killing drugs being pumped into me, thinking about anything else was difficult.

Don’t get me wrong, the “Pain Team” at any hospital do an amazing job.  Even with my allergy to morphine, they managed to keep my pain scale rating in the early days to around 3 or 4 (out of 10) – until I moved.  I was horrified when they told me  it was time to start removing the pain drugs, but they were right, after five days or so the oral pain killers were enough to keep things under control.

There is a side affect to the pain drugs pumped into your body after surgery – dreams.  Really realistic, and sometimes scary, dreams.  Replays of childhood nightmares not experienced for decades.  I even visited my grandparents property as it was in the 1970’s, every detail just as it was during my childhood.

Thankfully my dreaming returned to normal (the sort of dreams normally forgotten in the morning) once the drugs had been wound back.

In the early days after surgery, all I could have was “sips” – little sips of water or small ice cubes.  With this type of operation the bowel will become inactive for days afterwards (after my 2002 surgery it took three weeks for my bowel to become active again!), so until then there cant be any solid food going in.  Even once there is a little bit of activity from the bowel, you still have to take it easy, or food will come out the way it went in.  Initially that means a clear broth, then soups before basic solids like bread.

After around six days I was able to eat normally, although keeping portion sizes small was best. 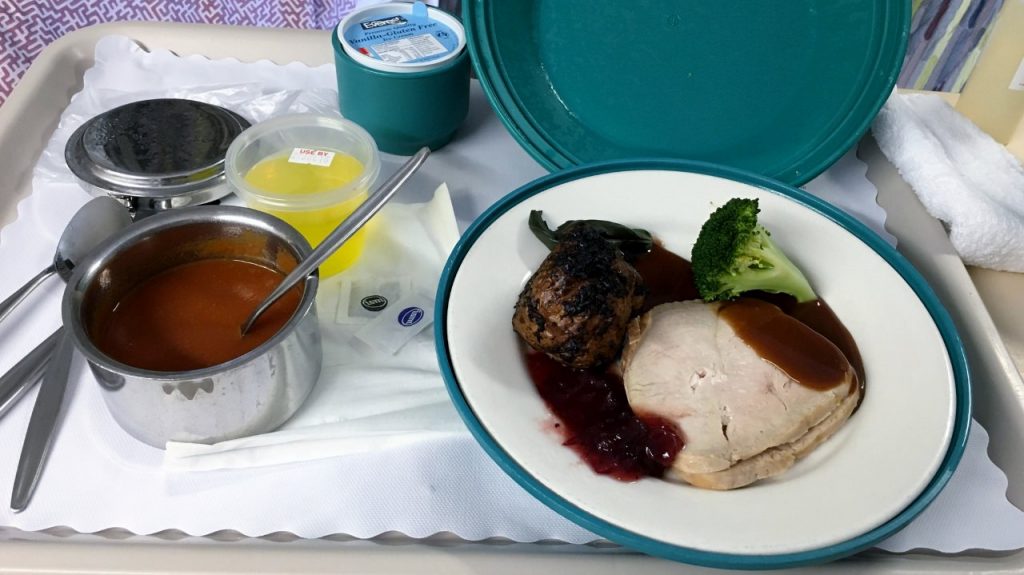 Soup, meat with vegies, followed by jelly and ice-cream.

We gave away Private Health Insurance some time ago, as it had just become too expensive, so we’ve been dealing with the Public Health System.  A few weeks after my last hospital stay we had a meeting with surgeons who explained my condition and the type of surgery needed.  They also explained I would have to endure a three month waiting list before I could be squeezed into surgery.  Thankfully my symptoms didn’t return while I was on the waiting list, so I was able to keep working throughout.

Ten weeks later I received a call to say the public hospitals were still full, but they were going to utilise space in the Private system to get me done.  So three months to the day after being told of the three month waiting list, I was admitted for surgery in a Private Hospital, as a public patient.  Of course Australia’s health standards are so high that the treatment in any facility would be almost identical.  The only benefit of a Private Hospital over public, as far as I can tell, is free TV, slightly better meals and the option of a private room (I declined and told the nurses to give it to someone who has paid for the privilege).

Victoria’s 4:1 nurse to patient ratio meant I always received the best of care.  It really is amazing the work our nurses do!  I felt compelled to leave the team of nurses on my ward a Thank-You Card when I was discharged.

My surgeon was great too, checking in on my progress every day, even on his way to his son’s weekend soccer match! 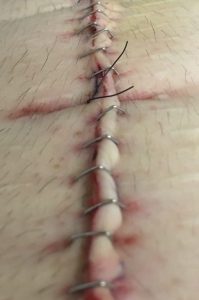 After the last drainage tube had been removed, and the surgeon has said I can go home “tomorrow”, that last day is spent being bored while the nurses still monitor everything – just to be sure.  The images and Instagram posts you see in this blog post are the result of my final day boredom.  I also managed to read a few of those magazines mentioned earlier and a few short walks (which still hurts) around the ward.

During my final night in the uncomfortable hospital bed I noticed more coughing, snoring, nurses talking and machines that go “ping” than any other night, but unhindered by any attached hoses I was able to roll into a semi comfortable position and string together a few hours sleep.

Now I’m at home, and glad to be sleeping in my bed, but I’m still bored.  I’m supposed to walk up and down the house as much as I can to help rebuild my strength.  I even walked to the letterbox this morning to get some Sun on me, but then felt I’d wasted that energy when there was no mail!

Also on my first full day at home today I’ve managed to watch three hours of breakfast television, a documentary on the Bacardi Rum manufacturing process and parts of the United States political convention, including presidential speeches, that were being shown live.  Oh, and write this really long blog post you’re reading now!

In five days time I see the surgeon again (or at least his nurse) to have the many staples removed from the wound.  Another week or so after that I might be able to go back to work on light duties.

All of this will have been worth it after three to six months when my fitness has returned and my insides are working as they should.

Hospital Reflections. This #hospital still has the old 4:3 ratio #TV screens, but everything is broadcast in 16:9 widescreen these days so appear squashed on these old sets. Unless I’m just looking at the blank screen reflection, which might be just a little bit more interesting than daytime TV. I’ve been in here over a week now, but doctor says I’m recovering well, so looking forward to getting home! 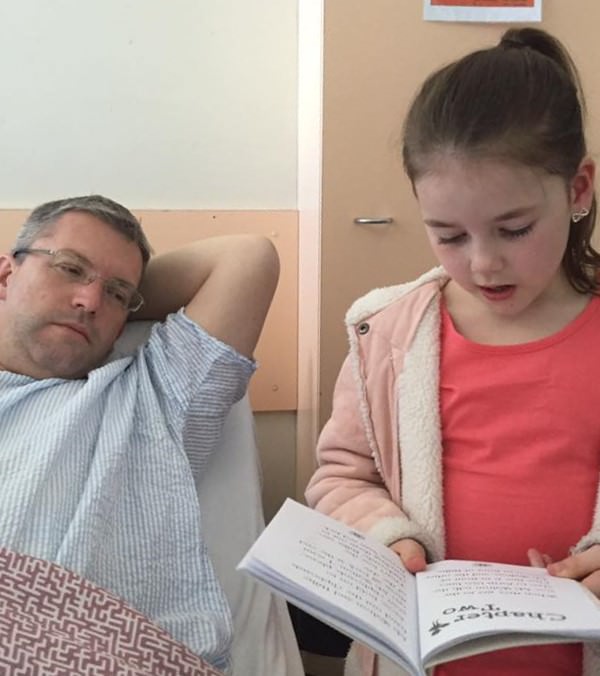 Karla reads to me in Hospital 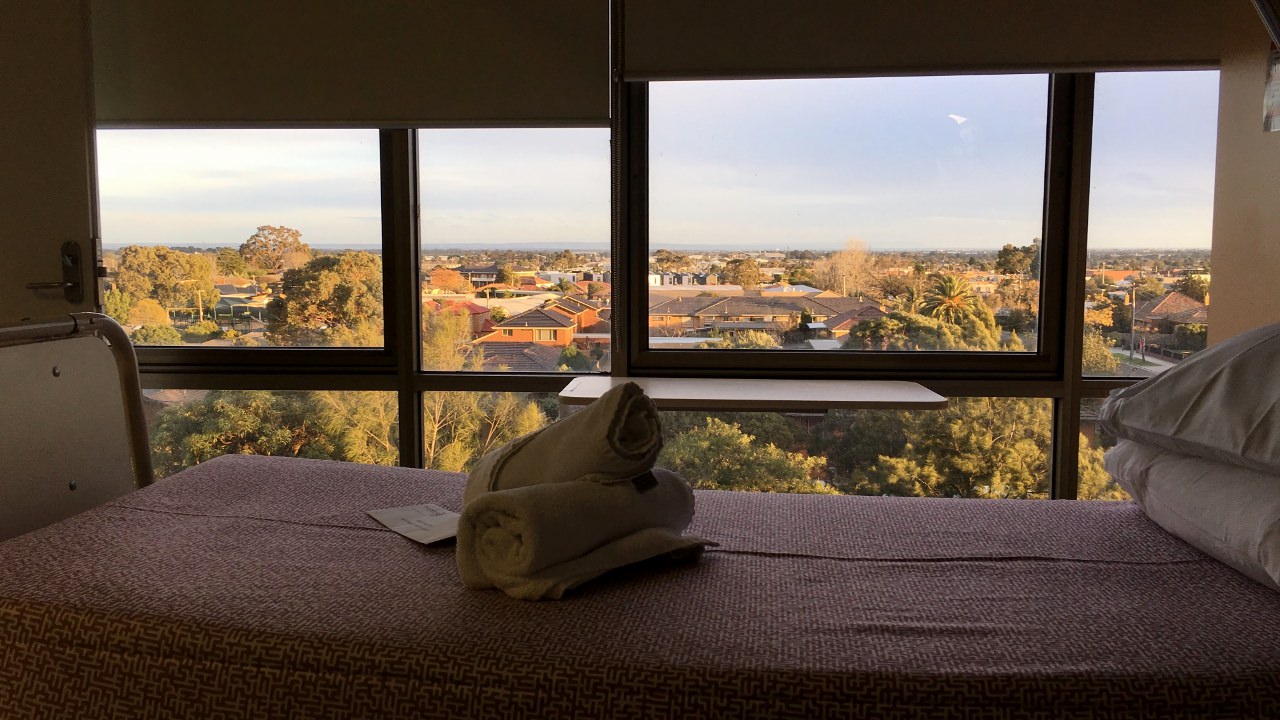 The view from my hospital room.