Back in September I told you of the difficulties I had installing the new Windows 10 Operating System to my desktop computer.  By contrast my younger son’s (Brad) laptop updated to Windows 10 without any problems.

Now it’s my older son’s (Josh) turn.  Josh was happy to stay with Windows 8.1 until he installed something dodgy that made his pc crazy and couldn’t be fixed.  The cure was a clean install of Windows, so we may as well move him up to Windows 10.  To get the free upgrade I had to re-install Windows 8, then upgrade that to 8.1 and then W10.  We experienced a few of the same difficulties as my machine, but got it installed eventually.

After a couple of months with Windows 10, Josh started having trouble.  The Start Menu stopped working, nothing would happen when you clicked on the Windows icon (or the Windows key on the keyboard).  My first instinct was to run Windows Update, but that was missing altogether (once I worked out a way to navigate to the old Control Panel without the Start Menu working).  Josh denies installing dodgy software again, so who knows how these problems sprung up from.

So it was time for another clean install of Windows 10 on Josh’s desktop, but regardless of how many times I tried, each time there would be any one of several error messages.

After countless failed attempts to re-install Windows 10 to Josh’s desktop, I gave up and installed Ubuntu Linux instead.  Ubuntu couldn’t be easier to install, it worked first time, connected to the internet, found our network printer, downloaded updates, everything just worked!

The only problem using a Linux Operating System was the game app Steam wouldn’t run on 64 bit Ubuntu, but a check of the forums and some Google searching found a fix, but it still wouldn’t run half of Josh’s games.  Josh wasn’t happy at not being able to play his favourite games, so he decided to persevere with Windows, trying, trying and trying again for hours.  Finally he was successful!

As I write this, Josh’s computer is alternating the install messages; “Installing Updates”, “We’re still working” and “We’ll tell you when we’re ready”.  Hopefully there will be no last minute crashes or other problems, fingers crossed!

Windows 10 has been publicly available for just over a month now, and I think I’ve finally got a stable installation on my main computer.  Well after several upgrade and clean install attemptes, three or four ISO downloads, countless crashes, a new hard-drive and new drivers, I certainly hope my PC issues are behind me.  In this post I will try to re-count how I went from a trouble free and stable Windows 8.1 machine to being excited that Windows 10 has stopped crashing. END_OF_DOCUMENT_TOKEN_TO_BE_REPLACED

July 29 was Windows 10 day, well it should have been.  I was part of the Windows Insider program (testing out the new Operating System on some old lap tops) and was all set to automatically receive the new public version on my main computer.

Checking my Update History I can see that Windows has tried to install the upgrade several times (the first time was actually a day early on July 28) but has failed each time. 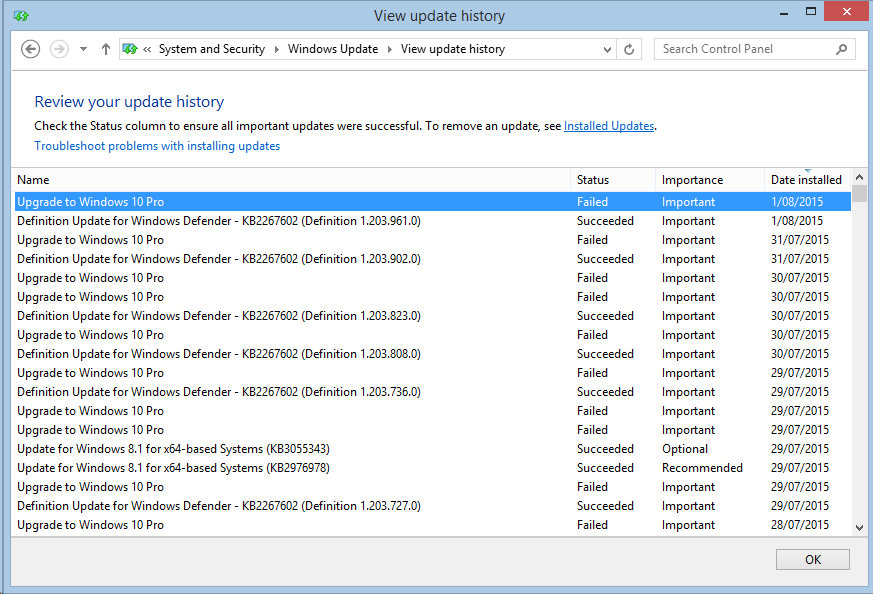 As I’ve written in my WebLinks blog, now I’ll have to download the ISO and either upgrade or clean install manually.  I’ve got no problem doing this, but frustrated at the extra time it will take instead of the automatic and “easy” upgrade.

I’m sure Joe Public out there wouldn’t bother to install Windows 10 manually from an ISO file, but certainly would curse Microsoft when his computer keeps trying to install it automatically and re-starting after every attempt. 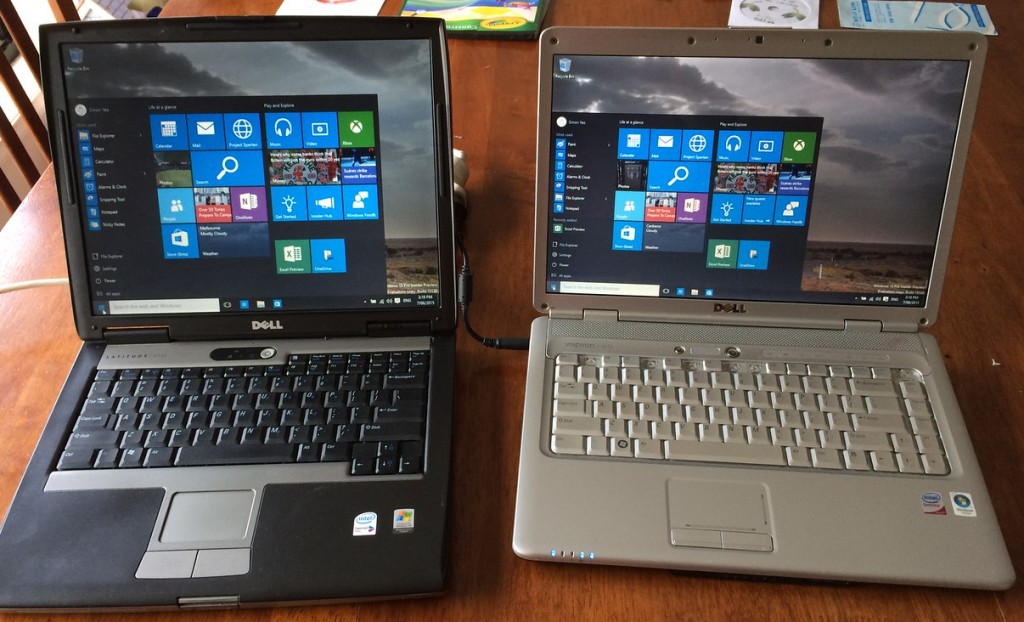 Microsoft are about to release their latest Operating System.  The upgrade to Windows 10 will be available to most users for free from July 29.  In the meantime enthusiasts can try out a preview version, which I’ve had running on a little netbook for a while.

While Windows 10 runs on the netbook, it’s physically too small of a computer to be much more than a novelty.  This weekend I dusted off a couple of old full size laptops to see if the new OS would run on some really old hardware.  One of the laptops originally ran Windows XP and would be over 10 years old.  The other was a Vista machine originally, but some years ago I’d installed Ubuntu because Vista was just too clunky.  Surprisingly the old XP machine had 1GB of RAM, which would have been overkill in its day, but I wasn’t sure if that would be enough for the big old Dell laptop to run the modern software.  The other Dell, has 2GB of RAM, so I gave that a better chance of working.

Once installed, I was really surprised that Windows 10 worked on both of these old machines.  It didn’t “just” work, the new operating system ran well without any hiccups on both old laptops.

Microsoft have been working hard to make their latest operating system work across a wide range of hardware, and I think they’ve been successful if it can run on low spec hardware such as these old laptops.

What about Windows 10 as an operating system?  I like it.  A lot of people don’t like change or are too scared to learn something new, and will probably complain, but I found it intuitive and easy to work out.  It’s a much better product than anything else we’ve seen from Microsoft.

Windows 10 is a free upgrade for existing Windows 7 and Windows 8.1 users from July 29, and will be supported with any further upgrades for the life of the hardware.