Last week I wrote how our house had finally been switched over to the the National Broadband Network (NBN).  Rather than having fibre direct to our premises (FTTP), we are connected by the inferior Fibre to the Node (FTTN) system, where the last link from a neighborhood cabinet uses old copper cable.  Don’t get me wrong, NBN via FTTN is still an improvement over the old ADSL technology, and there was no need for our front yard to be dug up for new cable, nevertheless I wasn’t seeing the speeds I’d heard were possible on the NBN.

Luckily our existing broadband plan had expired, so I could shop around for a better deal.  It’s interesting that our carrier, Telstra, doesn’t mention internet speed in any of their literature, advertising or on their websites.  They sell on data capacity, but their default connection speed is 25Mb/s download / 5Mb/s upload (known as simply 25/5), which is pretty close to the speeds I was seeing on our new NBN connection.  It turns out that NBNco offers five tiers of broadband speed; tier one is actually slower than a good ADSL connection, tier two is marginally better, up to tier five which offers a theoretical maximum speed of 100/40. 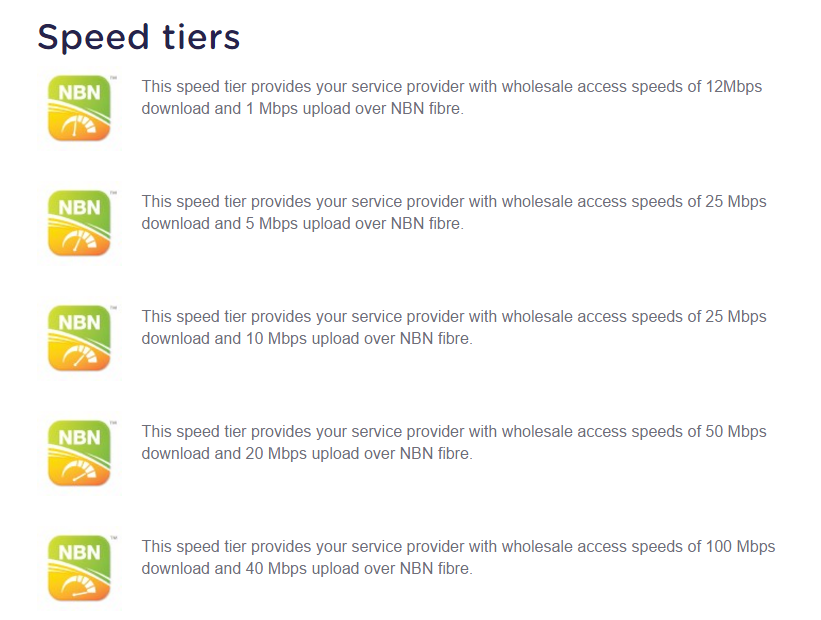 By making Tier Two speeds (25/5) their default NBN speed, and not promoting faster alternatives, the majority of Telstra’s customers wont know any different.  The average customer will still see an improvement over ADSL and their phone line might be a bit clearer, so Telstra is hoping they’ll be saying “this NBN is fantastic”.  What’s really happening is Telstra is saving a bucket load by not paying the higher wholesale price for the faster NBN speed tiers, while selling one of the most expensive Tier Two NBN plans on the market, with added extras to make it sound like a good deal.  I wonder how many Telstra customers actually use their “free” TelstraTV or TelstraAir.

When asked directly, Telstra will admit to faster NBN speeds being available as a “Speed Boost” for an additional $20 on top of your plan. 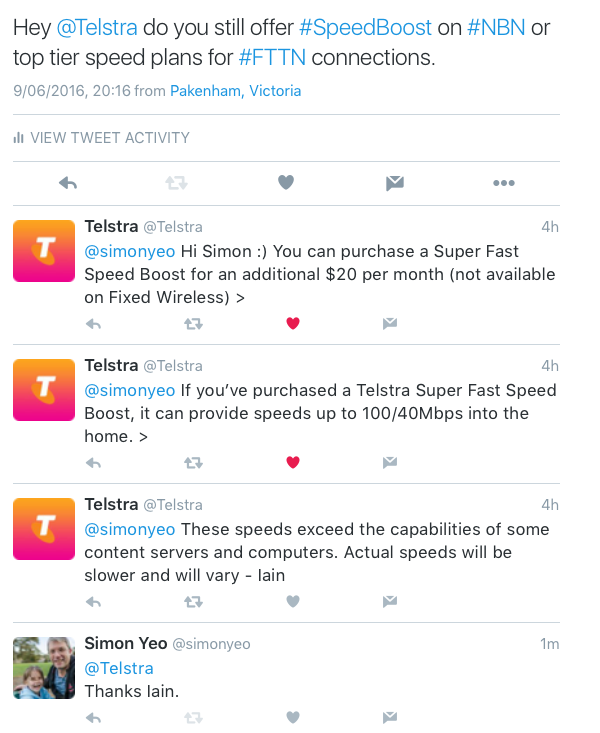 Now I knew that FTTN wouldn’t give me the full 100/40 speed, but as the speeds I was getting were at the top of the Tier Two range, there was a pretty good chance I could get better.

I went into my local Telstra store to see if I could negotiate a deal without the extras (TelstraTV, etc) but with a higher speed.  I was surprised the store staff couldn’t negotiate at all, even when talking to the manager, I was told they could withhold the TelstraTV but I’d still be charged the full plan price.  I couldn’t even pay for the Speed Boost on my existing plan, I’d have to sign up for a new contract.

I was even more surprised to hear another store employee trying to explain the NBN to a customer.  She said “…everybody has a node out the front of their house and that’s better than fibre into your garage”.  There’s a staff training failure right there, each node services over 100 homes.  We don’t have a single node on our street, the nearest one is a couple of blocks away.

With no success in store, I tried the Telstra online chat support service.  They couldn’t negotiate either and suggest I call and speak to someone in person.  I didn’t really feel like talking to an overseas call centre, so I started to look at other carriers more seriously.  iiNet had a good deal, TPG an even better offer so I decided to ditch Telstra and sign up with TPG.  Before I could register with TPG the internet dropped out.  Telstra have suffered a few outages this year, how ironic that this disconnection prevented me from leaving them!

Later that night, when the internet was back up, rather than go through the TPG sign up process I decided I would try to call Telstra. The guy I spoke to said he couldn’t help with NBN because he was an ADSL expert (time for some re-training mate).  He put me through to the “NBN Department” and said if they don’t answer, or you get disconnected, call them direct on 1800 834 273.  After being on hold for around 15 minutes I gave up.  A bit later I tried the direct number which was answered straight away by a nice guy who understood what I wanted.  He looked at my account and saw we also had five mobile services plus Foxtel and that we had been a long term Telstra customer, he said “I reckon we can do something for you, let me check with my boss“.  After about 30 seconds he came back to me and said “we can ditch the TelstraTV and give you the Speed Boost for free“.  That sounded pretty good to me so I agreed.

Within an hour of agreeing to the deal, we were switched over to the faster NBN speed tier, which for our house is just under 40/17.