12 Year old Brad and I decided to take the train into Melbourne today to see the Grand Final parade, and other festivities at the MCG and Yarra Park.  Brad is excited about football, and it’s a great way to soak up some finals atmosphere without actually going to the big game tomorrow.  We took the train, rather than drive, to avoid having to find a car-park and because Public Transport Victoria (PTV) had promoted a hassle free way to “Get from A to the G” (‘G’ is an abbreviation of MCG – Melbourne Cricket Ground).

It’s #AFLGF week! With extended and extra services, we’ll get you from A to the G, hassle-free http://t.co/G7TYDzM180 pic.twitter.com/lVLxW9X5b2

We live walking distance to Pakenham train station, so the car stayed at home and Brad and I set off on foot.  I wasn’t too concerned about waiting 20 minutes for a train to the city, as today is a public holiday, so I assume there were less services than normal.  Our train departed Pakenham station on time, crossed Main Street, but the acceleration turned to sudden braking and the train stopped before we made it to the next level crossing at McGregor Road.  A couple of minutes later the train driver walked passed our window, passengers were wondering if there had been an accident.  After a few more minutes the driver walked passed again, in the same direction, I assume he was walking around the train looking for something.  We finally started moving again after around 15 minutes, there was no explanation.  (I’ve been on trains before when the driver would announce over the speakers that there had been a delay due to a signal fault.)

The rest of our journey was unevenetful, until we passed Richmond Station.  We were planning on going through the City Loop (subway) to Parliament Station, which is close to where the parade was starting from.  The sign inside the train said “Next station is Parliament” and I was expecting the train to start descending onto the underground tracks, but it instead stayed above ground and headed towards Flinders Street Station.  That sign in the train changed to “Arriving at Flinders Street”, which was followed by cursing by other passengers and some people saying “we’ll just have to walk from here”.  I was hopeful the train would go around the loop after Flinders Street, but when we pulled up at the platform the screens said that train was heading to Cranbourne without going via the underground stations.  (I wonder if skipping the City Loop was to make up time for the delay at Pakenham and arrive at Flinders Street “on-time”?)  Thankfully the screens also gave information on which lines were the next to travel through the City Loop, so we went a couple of platforms over to the Glen Waverley line and hopped on a train to Parliament Station.

A few hours later, after watching the Grand Final Parade and walking down to Yarra Park for the MCG festivities, we made our way to Richmond Station to catch a train back home to Pakenham.  Everything was normal on the way home until we were approaching Dandenong station.  The in-carriage announcement said “Arriving Dandenong, this train will be terminating at Dandenong”.  Terminating means the train wont be going any further, so most passengers got off the train to then watch it depart towards Pakenham.  I’m not sure whether it actually kept going to Pakenham, or just went up the line a little way to change tracks, but regardless there was no explanation why we were told the service was terminating when it was scheduled to go all the way to Paky.

Once on the platform at Dandenong there was no information to say when the next Pakenham train would arrive, another passenger went to find out and came back to say there wasn’t another metro train to Pakenham for at least 20 minutes.  However there was a Vline (regional service) arriving in one minute, the platform sign said it would run express to Nar Nar Goon, which is the next station after Pakenham, but classed as a regional station because the electrification ends at Pakenham.  I called my wife and asked her to pick us up from Nar Nar Goon, but when we boarded the Vline train the in carriage sign said “Next station is Pakenham”.  I texted my wife back about the conflicting information and said I will let her know whether we were able to get off at Pakenham or whether we’d need a ride from Nar Nar Goon.  The Vline train did stop at Pakenham and we walked home from there.

Yes the public transport system got us around today, but thanks to conflicting or insufficient information we had a frustrating and disappointing experience.  As you can see, I tried to interact with PTV through social media, but there was no response to my tweets.  Knowing my way around Melbourne and surrounds helped us get to where we wanted to go when the train schedules unexpectedly changed.  Who knows how a tourist, or young teenagers travelling alone, would be affected by similar disruptions.

My tweets to PTV

UPDATE:
Thanks to the power of Twitter, it turns out possibly an unauthorized person in the rear driver’s cab caused the delay just after leaving Pakenham this morning. 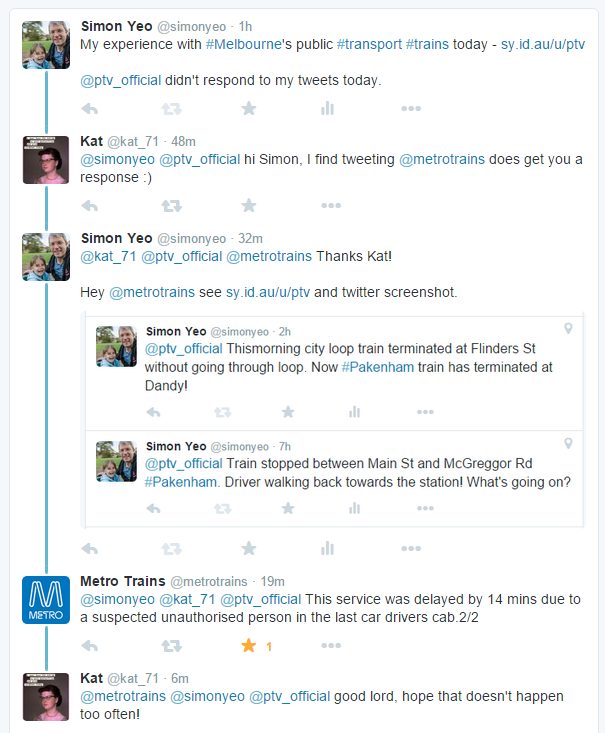 UPDATE FROM METRO TRAINS;
I’ve received the following correspondence from Metro regarding my travelling experience.

Thanks for your email received on 2 October 2015.

I’m sorry you were affected by delays and alterations to your Pakenham line trains on both the morning and afternoon of the same day.

I have checked our train performance records and the 9:53am Pakenham to Flinders Street train was delayed by approximately 15 minutes between Pakenham and Cardinia Road stations after an unauthorised person accessed the rear driver’s cabin.

The 2:35pm Flinders Street to Pakenham train (scheduled to depart Richmond at 2:48pm) was delayed by approximately ten minutes before being altered to terminate at Dandenong station due to a trespasser near the tracks at Dandenong.

When trespassers are reported on or near trains or tracks, we have to either suspend or run trains at a reduced speed while Victoria Police attend and investigate the scene. This can result in trains and drivers being out of position to operate services, causing further delays.

Following service delays, our train controllers must sometimes alter the scheduled stops or terminating points of trains to prevent ‘knock on’ effects on other services. We regularly review these decisions, with reports brought to the attention of Executive Management.

During disruptions of this nature, announcements are made by our staff based on the information made available to them, as guided by Victoria Police.

All our staff have been asked to keep you informed of service delays and alterations as soon as possible, and I’m sorry this was not your experience. We are continuing to monitor this aspect of their performance.

As regional services are outside of our responsibility, your feedback regarding the V/Line train you boarded at Dandenong station has been referred to V/Line under case reference 2015/.

Thank you again for your feedback. If you wish to discuss further, or would like more information, please call Public Transport Victoria: 1800 800 007, quoting reference number LC/, or send an email to customer.feedback@metrotrains.com.au.