Back “in the day” when I was a kid, I’m talking about the 1980’s, Dick Smith Electronics (DSE) was one of my favourite stores.  You could browse through loose electronic components and parts for my latest project (with prices starting at just a few cents) or dream about the latest high end electronic equipment such as ham-radio transceivers.  DSE was a true electronics shop.  It had grown from the Sydney car radio business of entrepreneur Dick Smith (an electronics enthusiast and ham radio operator himself), but kept that local electronics store atmosphere.  I loved going into the “Trickie Dickie” shop, and remember saving to buy my first CB radio with my Dad.

Over the years, DSE was sold to Woolworths (1982) and became more of a main stream electronics store with TVs, computers, cameras, etc. rather than the less popular enthusiast items.  Woolworths sold the DSE chain to a private equity firm in 2012.  A year later Dick Smith became a public company on the stock exchange.

Today I went into my local DSE store (Pakenham) to by an SD memory card.  I was horrified to find that a major electronics retailer, that sells a range of digital cameras, would only have a few home brand SD cards.  I’m sorry, but I’m only trusting my valuable photos to a reputable brand memory card!  The Dick Smith branded cards weren’t even good value, I ended up buying a SanDisc 16GB SDHC from The Good Guys for $20, which was half the price of the same spec Dick Smith card.  That definitely puts DSE into the “rip-off” category! 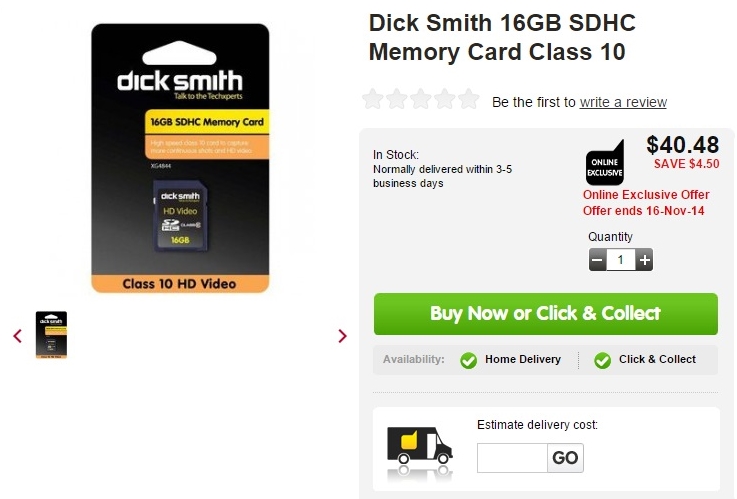 Cropped screen shot of the DSE web site, and the rip-off price of their home brand memory card.

Before and after Masters retail

I’m fascinated by “Before and After” shots that document progress and change, so I recently snapped this pic of the future Masters retail site in Warragul.  When the building work starts, and when it’s finished, I will stand in the same spot and photograph the change.