Siri sings a song and tells a story

When I accidentally activated Siri (the Apple Personal Assistant found on iOS devices such as the iPhone) this week, I was reminded that you can actually have a bit of fun with this built in app on my phone.  Seeing as I haven’t really used Siri in real life, I thought I’d have a play…
First I asked Siri to “sing me a song”; 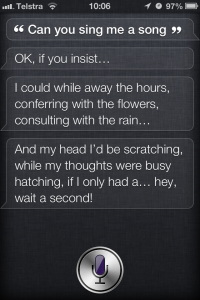 I then asked Siri to “tell me a story”, but this time “she” was a bit more reluctant and came up with several excuses such as “you’ve heard it before”, but with a bit of persistence I finally got my story;